A Florida family has embarked on a wild ride to bring a 1970s time capsule in Indiana into the 21st century.

On a whim, they bought a vintage gem in Fort Wayne, IN, covered top to bottom in shag carpet, after seeing it online. It was our most popular home of the week in early December and garnered hundreds of thousands of views—the Jackson family among them.

How the time capsule was won

“So we weren’t actually looking for a home to buy,” says Alysha Jackson, who lives in Clermont, FL, with her husband, Nate, two toddlers, and a rescue dog, Ingrid.

“We have a home there and we love it,” she says. “We had talked about getting into real estate one day, but it wasn’t really on our radar yet. Then this house went viral.”

Nate saw the house online and came in with his computer to show the listing to Alysha.

“He’s like, ‘Hey, don’t shut this down right away, but what if we put in an offer on this house?’” she says.

“Usually, I’m the skeptical one, but I just looked at it and had this gut feeling, and I said, ‘You know what? I actually love it. Let’s put in an offer.’”

Like everyone who laid eyes on the photos, Nate and Alysha first spotted the colorful carpet. The deep shag is hard to miss: It’s everywhere, even on some of the walls.

Alysha says her first reaction was: “Whoa, that’s a lot of shag carpet!” Then, she noticed how much potential the house had.

“I kind of envisioned what it could look like with some renovating,” she says. “We’re staying thing true to the vibe of it and the time period, but we have to update it.”

The Jacksons journey back in time

Just a few weeks after putting in their offer, the two former teachers, who now sell on Amazon, packed up their family minivan (including Christmas presents) and headed north. Their work offers them the freedom to work where they choose.

Since then, the family has been living bare-bones in the house, with just a few mattresses and other essential items. They have decided to live in the home as is for a while.

“We wanted to just stay in it a little while before changing anything, because we just wanted to get a feel for the house before we just came in and made sweeping changes,” Alysha Jackson explains.

“I’m so glad we did, because we actually changed a lot of our designs based upon actually living in the home for a little bit first.”

Most importantly, they staged a 1970s-style photo shoot.

Even Ingrid, the dog, seems to have settled in.

“She has a spot in the house where she can see the entire yard, thanks to the surrounding sliding doors and windows,” Jackson says.

“Ingrid was so sad when she saw us packing the van for our trip here, but literally jumped up and down when we got the leash out and she realized she was coming with us on the trip.”

The former owner of the house, James Sherbondy, a retired architect, designed the home as his family’s personal residence. It was occupied until just a few months ago, so everything inside was in working order.

“We walked in, brought in our stuff, and used the fridge. The bathrooms were functional. It was pretty great,” Jackson says.

Everything in the kitchen works, and the cabinets are in good shape. However, the layout may not work for the family, she adds.

The family made some immediate changes for safety reasons and are currently living on the lower level. They’re tackling that and the main level first, and leaving the upstairs master bedroom and bathroom for last.

A bathroom with green counters and blue sink will ultimately meet its demise, but the Jack-and-Jill style entry is staying.

The Jacksons have sought input from a number of experts on the Instagram account they started for their rehab project. They had hopes of reaching 10,000 followers by the summer. As of now, they’ve blown past their goal and have over 30,000 folks tracking the renovation journey.

Sadly, for lovers of colorful floor coverings, the carpet is one of the first things that’s going to go.

“There’s literally carpet in every single room, including the bathrooms. It’s everywhere and it’s 50 years old. From what we know, it is original to the home,” Jackson says.

She added that there are stains in several places, and it doesn’t smell particularly great, especially in the bathrooms.

Eventually, there will be new flooring in many of the rooms and tile in the bathrooms. But the carpet won’t vanish completely.

“I am going to be making an art piece of the different carpet colors,” she says. “There’s about four or five different colors in the home, and we just want to keep a piece of each. I’m going to cut some out from each color—deep-clean it, of course—and then create some sort of art piece with it to hang in the house on the wall.”

People on social media had a lot to say about the carpet-bedecked bathtub in the master bedroom. The tub has purple tile and no curtain. For now, it’s the only bathtub in the house, so the kids need to take their baths there.

Jackson says the tub is super clean, but the trick for the couple is to keep the children from enjoying their time on the floor.

“To them, it’s like a big towel,” she adds. The first time their son took a bath, she says, “He got out of the tub and started rolling on the shag carpet.” 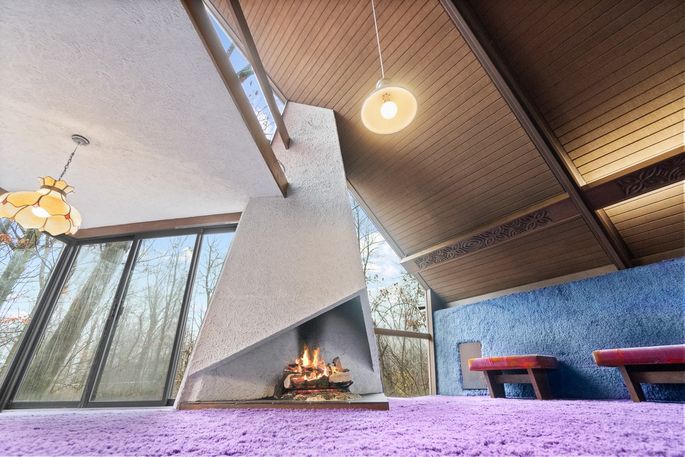 Other modifications on the way

Back on the main level, the dramatic floor-to-ceiling fireplace will stay—but with some modifications for safety.

Some of the wood paneling and carved accents throughout the house will also remain.

“I stare at the wood every day. I think that’s maybe my favorite part of the house,” Jackson says.

Some people on Instagram say the carved wood might be by an artist named Ackerman, and the Jacksons are trying to verify that.

“It’s the first thing you see when you walk in the home on the door,” Alysha says.

Life outside the box

The Jacksons rehabbed their Florida house, so a huge project isn’t entirely new for them and they have some family support nearby. Both Alysha and Nate are from Indiana, and much of their family still lives there. While some close to them were surprised by the somewhat impulsive purchase, they weren’t shocked.

“We kind of joke with people that Nate and I are ‘Go big or go home’ people. We kind of live life outside the box, so they were excited for us,” Jackson says.

Some relatives thought they were crazy, she adds, but changed their minds when they saw how beautiful the home is—and they’re especially excited that the family will be closer to them.

For now, the family plans to split time between the two homes and rent the other one as a vacation rental.

We’ll be tracking the process of this time capsule transformation and can’t wait to see what’s next.