Netflix Prices Have Gone Up: 5 Netflix Alternatives For You To Try

A week or so ago Netflix announced that they would be raising their prices on all of their streaming and DVD rental plans.

There was a bit of an outcry throughout the internet with people talking about how they were going to cancel or drop part of their package to reduce costs.  Nobody likes to pay for more for a service that they’ve been signed up for and using for such a long time.

It’s understandable to not want to pay more, but what are your alternatives if you don’t want to pay for Netflix anymore?

Today I thought I’d look at how the Netflix pricing is changing, and what entertainment alternatives you have to replace them.

In their announcement that prices were changing Netflix told how pricing was changing, and what was going to be available for plans going forward.  You can either do streaming only or DVD only.

Here is their new pricing. 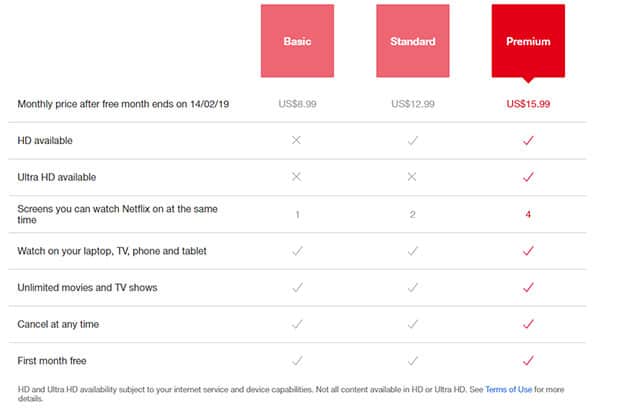 To find out if you think your plan is still a good value even with the price jump, check out our post: Is Netflix A Cost Efficient Entertainment Option For You?

With a lot of people talking about canceling Netflix or moving to another provider, just what other streaming and DVD providers are there out there?  Here’s a quick rundown of some of the more visible options.

Redbox Kiosks are located at a variety of gas stations, department stores, grocery stores and restaurants all over the United States.  You can rent any new release or classic movie from the kiosk for $1.75/night plus tax. They also have video games and Blu-Ray movies for slightly more.  If you try hard you can also find codes for free rentals at the Redbox kiosks, although those are becoming harder to find.  Still, $1.75 per movie is an affordable option, especially if you’re close to a Redbox location like we are.

Pluto TV has an app for most streaming devices that allow you to watch a 100+ channels of free video entertainment from movies and music to TV shows.  Pluto is the free TV streaming service, but it feels like a premium product. They also have some free streaming movies available to watch, although you do have to watch commercials.

Amazon launched a video streaming service a few years back. The best part?  It’s free for all Amazon Prime members.  So if you’re already a member of Amazon Prime’s unlimited free or reduced price shipping on the site, you’ll get the video streaming service for free (not if you’re on one of the free Prime memberships for students or parents, however). The cost?  $119/year for Amazon Prime, or about $9.92/month.  Not too bad, especially when you also get all the benefits of 2 day shipping on all Amazon items.

The only downside that I’ve found is that they only have a fraction of the titles available on Netflix, so options aren’t as varied and some more popular and new release movies may not be available.

In addition to their Amazon Instant Video streaming options you can also purchase or rent selected movies and TV shows via Video On Demand.  Rentals start at about $3.99, and movie purchases cost $9.99 or more.

HBO programming has only been available via a cable TV package for the longest time.  Since 2015 HBO Now has provided HBO programming outside of a cable package.

If you’re a fan of certain HBO shows this makes cutting the cord much more possible. You can get HBO Now for $14.99/month.

Another alternative, especially for folks who like to watch a lot of TV and classic movies is Hulu.  It costs $7.99/month and you can stream the video content to a variety of connected devices including Xbox and Playstation consoles, Fire TV, Rokue, as well some Blu-Ray players and TVs.

If you want to get a little more down and dirty, you can set up a streaming video solution like we have at our house using a Playon Media Server.

Philo is quickly becoming the go to option for people who don’t want to pay a lot for cable TV, and don’t care about sports (they don’t carry sports or major news networks, making it much cheaper).

They are only $16/month for their basic cable package, with 40+ channels from Discovery, TLC and History to HGTV.  Add 10+ more channels for only $20!

There Are Other Options, But Are Any Better?

As you can see from the list above there are several other options of video rental services to use instead of Netflix if you aren’t happy with the price increases, but the question remains – are any of them better or more affordable options than Netflix?

Even after the price change I still think that Netflix offers a pretty good value in comparison to the other sites and video rental services.  It still costs less than a full cable TV package, and their streaming options, while still only being OK – are still ahead of most other sites offering the service.

Can you find cheaper options? Maybe, but their combination of ease of use, DVDs and streaming, leave them hard to beat still in my opinion.

Right now we’ll probably continue on with our streaming plan and pay the extra money just because we’ve been pretty happy with the service.

How about you – are you cancelling your Netflix plan, and if so are you going to be using something else instead?  Tell us your thoughts on the price increase, and about what alternatives you might be likely to try.