How to prepare for a natural disaster

My world is on fire.

As you may have heard, much of Oregon is burning right now. Thanks to a “once in a lifetime” combination of weather and climate variables — a long, dry summer leading to high temps and low humidity, then a freak windstorm from the east — much of the state turned to tinder earlier this week. And then the tinder ignited.

At this very moment, our neighborhood is cloaked in smoke.

I am sitting in my writing shed looking out at a beige veil clinging to the trees and nearby homes. The scent of the smoke is intense. My eyes are burning. After everything else that’s happened this year, this feels like yet one more step toward apocalypse. So crazy!

Fortunately, Kim and I (and the pets) are relatively safe. We’re worried, sure, but not too worried. Our lizard brains make us want to flee. (“Fight or flight” and all that.) But our rational brains know that unless a new fire starts somewhere nearby, we should be safe.

Here’s a current map of the fire situation in our county. (Click the image to open a larger version in a new window.) 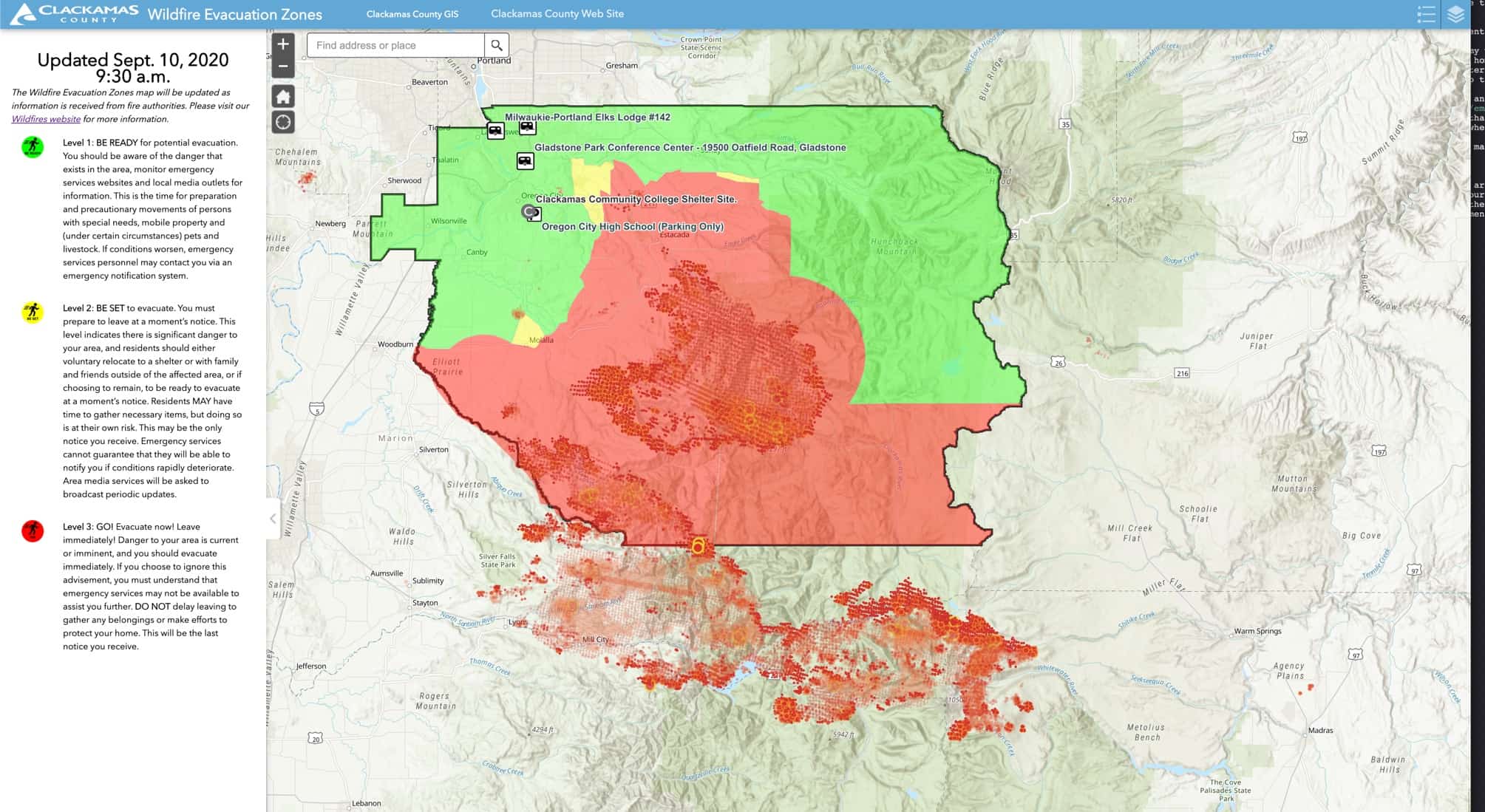 The areas in red are under mandatory evacuation orders. (And the red dots are areas that have burned, I think. They added the dots to the map this morning.) Residents of areas shaded in yellow need to be prepped to leave at a moment’s notice. And the areas in green are simply on alert.

See that town called Molalla? That’s where my mother and one of my brothers live. My mother’s assisted-living facility was evacuated to a city twenty miles away. My brother and his family voluntarily moved from their home to our family’s box factory. But even that doesn’t feel 100% safe. (The box factory is located just to the left of that cluster of red dots at the top tip of the yellow area around Molalla.)

Kim and I live near the “e” in Wilsonville. We’re more than twenty miles from the nearest active fire. We should be safe. But, as a I say, we’re worried. So, I spent much of yesterday prepping for possible evacuation.

Update! As of Sunday afternoon (September 13th), things have calmed for us. The evacuation notice has been lifted for our area. The weather is changing. Rain is only a day or two away. So, we’re standing down. Now, having said that, there are still many people in our country who remain evacuated, and there are others who have lost their homes. (My brother’s town and home will probably emerge unscathed. Probably. For now, though, they’re still evacuated and living in an RV at the box factory.)

We Oregonians don’t have a protocol for emergency evacuations. It’s not something that really crosses our minds.

While the Pacific Northwest does have volcanoes, eruptions are rare enough that we never think about them. And yes, earthquakes happen. Eventually we’ll have “the Big One” that devastates the region, but again there’s no way to predict that and it’s not something we build our lives around. (Well, many people have been adding earthquake reinforcement to their homes, but that’s about it.)

In the past fifty or sixty years, the Portland area has experienced four other natural disasters.

Now, in 2020, we’re experiencing the worst wildfires the state has ever seen. That’s roughly one disaster every ten or fifteen years, and it’s the first one during my 51 years on Earth that’s made me think about the need for evacuation preparedness.

Kim and I have been asking ourselves lots of questions.

If we were to evacuate, where would we go? What route would we take? What would we carry with us? How would we prep our home to increase the odds that it would survive potential fire?

Let me share what we’ve decided and what we’ve learned. (And please, share what you know about emergency preparedness, won’t you?)

The first thing we did was brainstorm a list of things that were important to us. Without reference to experts, what is it that we would want to do and/or take with us, if we were to evacuate.

After creating our own list, we consulted the experts.

In this case, we looked at websites for communities in California. California copes with wildfires constantly. (And, in fact, Kim’s brother and his family recently had to help evacuate their town due to wildfires!) For no particular reason, I chose to follow the guidelines put out by Marin County, California. I figured they know what they’re talking about!

The FIRESafe MARIN website has a bunch of great resources dedicated to wildfire planning and preparedness. I particularly like their evacuation checklist. While this form is wildfire specific, it could be easily adapted for other uses, such as hurricane preparedness or earthquake preparedness.

The ready.gov website is an excellent resource for disaster preparedness. It contains lots of info about prepping for problems of all sorts. You should check it out.

FIRESafe MARIN and other groups recommend putting together an emergency supply kit well in advance of possible problems. Each person should have her own Go Kit, and each should be stored in a backpack. (In our case, I have several cheap backpacks that I’ve purchased while traveling abroad. These are perfect for Go Kits.)

What should you keep in a Go Kit? It depends where you live, of course, and what sorts of disasters your area is susceptible to. But generally speaking, you might want your kits to contain:

That seems like a lot of stuff, but it’s not. These things should fit easily into a small pack. Each Go Kit should be stores somewhere easy to access. Kim and I don’t have Go Kits yet, but we’ll create them soon. We intend to store them in the front coat closet.

Writing this article reminds me of one of the first posts I shared after re-purchasing Get Rich Slowly. Almost three years ago, I wrote about how to get what you deserve when filing an insurance claim. This info from a former insurance employee is very helpful (and interesting).

I spent much of yesterday prepping for possible evacuation. This isn’t so much out of panic as it is out of trying to take sensible precautions. I gathered things and put them in the living room so that we can be ready to leave, if needed. If authorities were to upgrade us from level one to level two status, I’d move this stuff to my car.

Also as a precaution, I moved stuff away from the house and thoroughly watered the entire yard. (Not sure that’d make much difference, but hey, it can’t hurt.) I created a video tour of the house that highlights anything we have of value. And so on. This took most of the afternoon.

This morning, I can see that the neighbors are doing something similar. We’re all trying to exercise caution, I think.

Kim and I will almost surely be fine. Although the smoke is thick here at the moment — it’s like a brownish fog, and it’s even clouding my view of the neighbor’s house! — there aren’t any fires super close to us. And barring mistakes or stupidity, there won’t be any threat to our home.

Still, it’s good for us to take precautionary measures, both now and for the future. And it’s probably smart for you to take some small steps today in case disaster strikes tomorrow.