401k Early Withdrawal: What to Know Before You Cash Out

When it comes to making a 401k early withdrawal, there are a number of reasons why it might be tempting. With millions still unemployed due to the pandemic, unexpected expenses are taking a particularly hard toll. One reason why early withdrawal isn’t uncommon in the U.S. might be because it’s easy to assume you’ll have time to rebuild your 401k nest egg.

However, is the benefit of withdrawing your retirement savings early truly worth the cost? For many people, their 401k is their primary method of investing in their financial future. Before making a decision about early withdrawal, it’s important to consider the penalties and fees that could impact you. Read on to learn exactly what happens when you decide to dip into your 401k so you won’t be surprised by the repercussions.

How Much Are You Penalized for a 401k Early Withdrawal?

On the surface, withdrawing funds from your 401k might not seem like a bad option under extenuating circumstances, but you could face penalties. Young adults are especially prone to early withdrawals because they figure they have plenty of time to replace lost funds. 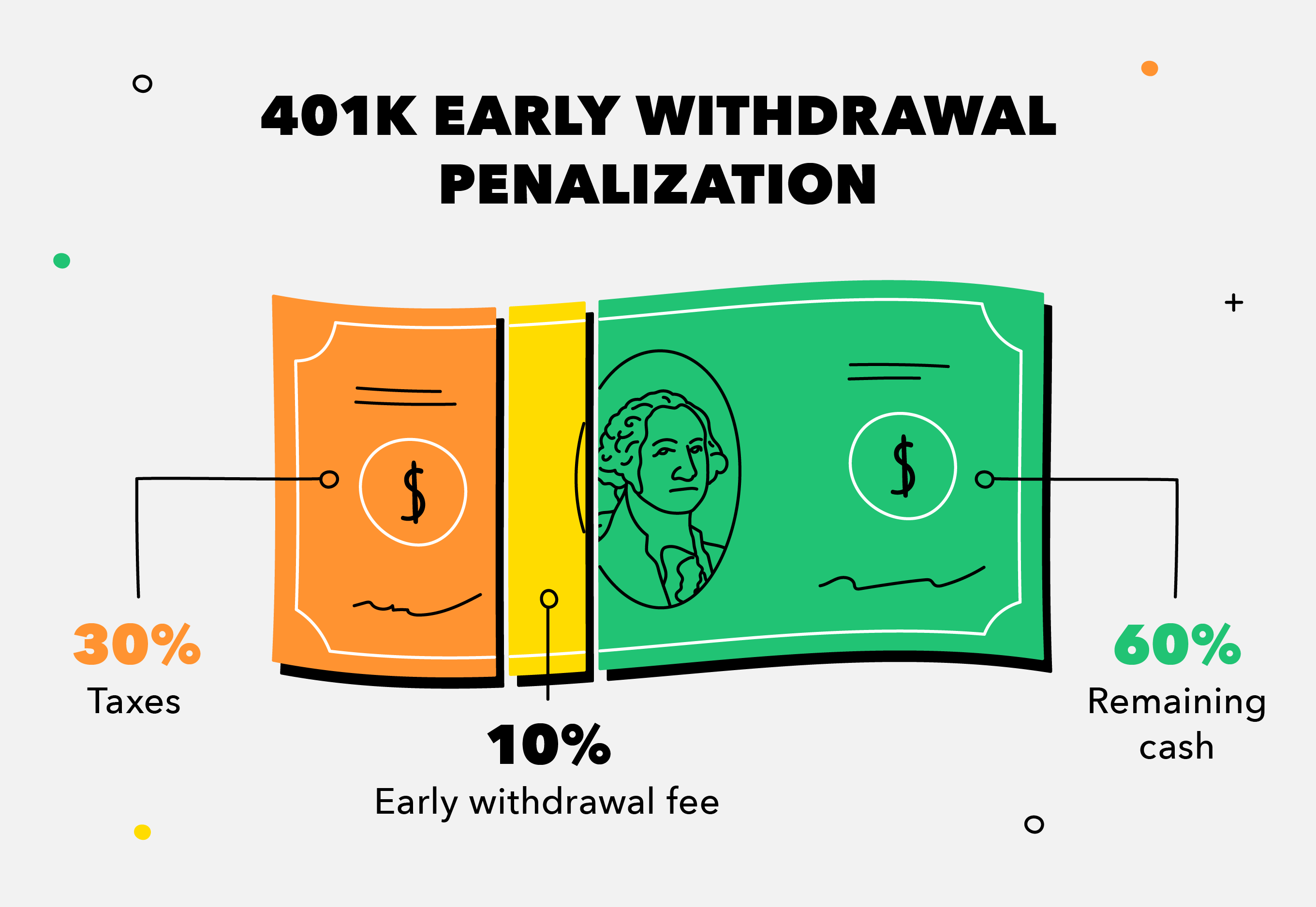 If you’re not experiencing a significant hardship, 401k early withdrawal probably isn’t the right choice for you. Ultimately, you could lose a substantial portion of your retirement savings if you choose to withdraw your 401k early to use the money to make other risky financial moves. Below, let’s delve further into the penalties that usually apply when you withdraw early.

1) Your Taxes Are Withheld

When you prematurely withdraw from your retirement account, your first consideration should be that you’ll have to pay normal income taxes on that money first. This means you’re losing at least roughly 30 percent of your savings to federal and state taxes before additional penalties.

Even if you only have $10,000 you want to withdraw, consider that you’re automatically giving $3,000 of your cash to the government. In the best case scenario, you might receive some money back in the form of a tax refund if your withholding exceeds your actual tax liability.

2) You Are Penalized by the IRS

If you withdraw money from your 401k before you’re 59 ½ , the IRS penalizes you with an extra 10 percent on those funds when you file your tax return. If we use the example above, an additional $1,000 would be taken by the government from your $10,000 — leaving you with just $6,000. If you’re 55 or older, you could try to get this penalty lifted by the IRS through the Rule of 55, which is designed for people retiring early.

Also, there are exceptions under the CARES Act, which is designed to help people affected by the pandemic. There are provisions under the act that state individuals under the age of 59 ½ can take up to $100,000 in Coronavirus-related early distributions from their retirement plans without facing the 10 percent early withdrawal penalty under certain conditions.

3) You Lose Thousands in Potential Growth

Even if you’re not deterred by tax penalties, think twice before you sabotage your long-term retirement savings goals. When you withdraw money early, you’ll miss out on potential future savings growth because you won’t gain the perks of compound interest. Compounding is the snowball effect resulting from your savings generating more earnings — not only on your principal investment but also on your accrued interest.

Also, if you make a 401k early withdrawal while the market is down, you’re doing yourself a disservice because you’ll be leaving thousands on the table. It’s unlikely you’ll fully recover the lost years of compound interest you would have benefited from. You might need to get creative with a passive income stream to help support you later in life. 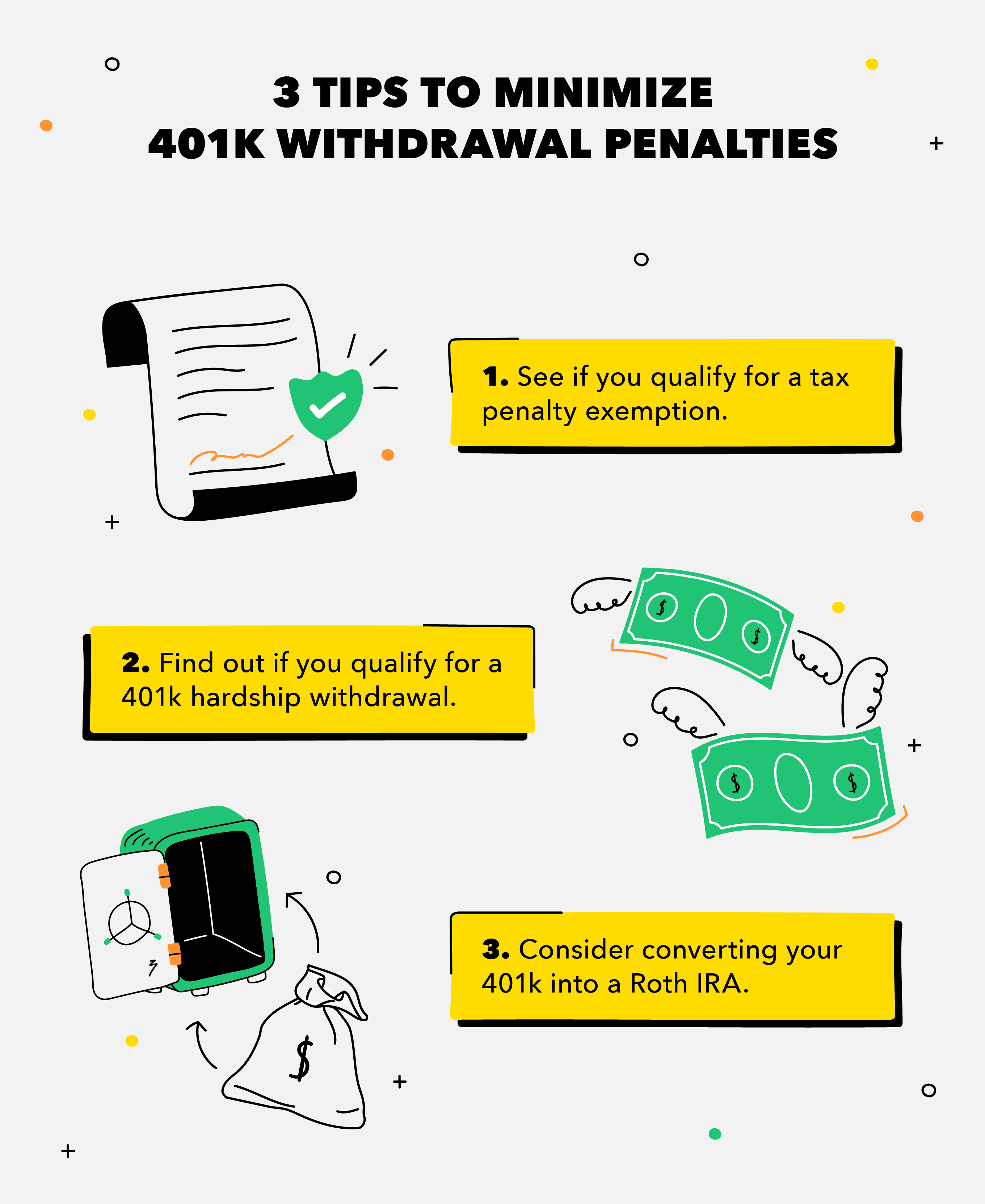 When Does a 401k Early Withdrawal Make Sense?

In certain cases, it actually might be strategic to move forward with 401k early withdrawal. For example, it could be smart to cash out some of your 401k to pay off a loan with a high-interest rate, like 18–20 percent. You might be better off using alternative methods to pay off debt such as acquiring a 401k loan rather than actually withdrawing the money.

Always weigh the cost of interest against tax penalties before making your decision. Some 401k plans do allow for penalty-free early withdrawals due to a layoff, major medical expenses, home-related costs, college tuition, and more. Regardless of your strategy to withdraw with the least penalties, your retirement savings are still taking a significant hit.

If you’ve left a job and don’t know what to do with your Roth IRA, a 401k transfer is a good option. Most likely, you will save money and have a wider range of investment options when you transfer your funds. 401k fees can be high, and rolling over your funds to a Roth IRA account could be wise in the long run. Also, be aware that the process is more complicated for indirect rollovers.

In short, 401k early withdrawals are usually counterproductive. Prevent compromising your hard-earned savings by using a free budgeting tool that will set you up for success. After all, being prepared and informed are two of the most important parts of maintaining financial health.